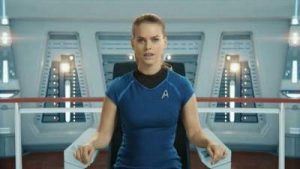 Alice Sophia Eve, the popular actress, was born in 1982 on February 6th. She is British by nationality. She has completed her bachelor’s degree from Oxford University. She has worked in many stage productions of the Royal Court Theatre. In 2004 she debuted her tv career with the film Stage Beauty and the series Hawking. She played the roles of Miss Frayne and Martha Guthrie, respectively, in these two series. Next, in 2005, she appeared in three other series such as Beethoven, The Rotters’ Club, and Agatha Christie’s Poirot. Next, in 2006 she was cast in Starter for ten as Alice Harbinson. The same year she played in Big Nothing and the series, Losing Gemma. Her other notable films are ATM, Sex and the City 2, Crossing Over, The Decoy Bride, The Raven, Decoding Annie Parker, Before We Go, Dirty Weekend, Criminal, The Con is On, etc. Her other tv credits and series comprise the renowned Black Mirror, Robot Chicken, Iron Fist, Hawking, The Rotter’s Club, Entourage, Ordeal by Innocence, etc.

Most Famous Works: Bombshell, The Queen Mary, Starter for 10