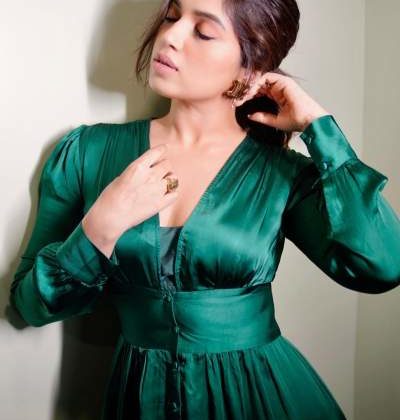 Bhumi Pednekar is an Indian Actress born on 18th July 1989. She predominantly appears in Hindi movies and works as a casting director for Yash Raj for six years. She first made her movie breakout in the romantic comedy Dum LagaKe Haisha, where she played the character of an overweight bride. Her extraordinary performance in the movie earned her a Best Female Debut title from Filmfare awards. Her performance as a small-town woman in comedy-dramas was the staple for her rise to fame. Bhumi played terrific roles in Shubh Manga lSaavdhan, Toilet: Ek prem Katha, Sonchiriya, PatiPatniAur Won, and Bala. She also appeared in Saand Ki Aankh, where she portrayed a sharpshooter, and she won the Best Actress award from Film Fare critics, and she shared the prize with TapseePannu. Her father is a previous labor minister, and her mother is an anti-tobacco activist. She mostly finished her schooling in Juhu from Arya VidyaMandir. Her parents finally decided to send her out to Whistling Woods at 15, but the university expelled her for poor attendance. However, within a year and a half, she came back within a year and took up a job as an assistant film director at Yash Raj Films. The job helped her pay off her debts, and she worked with the company for six years.